It takes a long time to get to Sherkin Island, through the bends of West Cork, down through Dunmanway and Skibbereen, the ferry from Baltimore, then a trip on the back of a golf-buggy up to the North Shore stage and camp site. One can only guess what is involved in organising the Open Ear festival on this small island, but the unlikeliness of it all is part of the attraction – we are there to escape.

The event has grown from 250 people in its first year to 650 in its fourth. Billed as a weekend of electronic and experimental music, it has previously featured Roger Doyle, Lakker, Spaces, Tonnta, Sunken Foal, and Linda Buckley and Laura Sheeran. Most of the music takes place in two small tents by a cliff edge. A sign nearby says ‘Danger’. I attended on the Saturday and Sunday (1–2 June).

The week before Open Ear, I was listening to Maria Somerville’s album All My People. Issued in March, it had slipped into my listening one morning and made me curious. How does she create that ghostly effect in her vocals? How does she build these soft, restrained songs? How will this subtle sound work at Open Ear in the open air? I imagined a tent full of silent listeners, for if you’ve made it all the way to Sherkin, you must be there for the music.

Overriding
Somerville was performing at the North Shore stage on Saturday afternoon. Twenty minutes before she began the tent was empty, but a couple of hundred tired faces soon crept in from the campsite nearby. The word had spread; they were there for her. But Somerville’s music is fragile, and her approach to performance unintrusive, so even when she began, the crowd’s talking never stopped. There was an added complication: the soundman had not come to grips with her music at all. The tent was now a mix of humming noise from the speakers, feedback and distracted conversation, with Somerville, her drummer and guitarist quietly trying to find their voice amongst it all. It was only a faint reflection of her album, disappointing, but hardly her fault.

Sometimes an audience needs a stab from a cattle prod. Step forward composer Jennifer Walshe, who quickly asserted herself with the crowd. Her piece ALL THE MANY PEOPLS, which I first heard at the New Music Dublin festival in 2014, draws on the jetsam of our digital age, often dredged up from social media. Over 30 minutes, she works through her funny, sad and disturbing commentary – ‘I want to join the scouts so I can learn to fire a gun; then I want to get a job so I can fire a gun’ – putting on a range of American and Irish accents, accompanied by physical actions and electronics. Often she would do hand movements that correlate specifically to certain words, like ‘tampons’, ‘celebrity dog’ or ‘unicorn’. The work is vocal and physical, mad but brilliantly familiar.

Her performance had to be forceful to overcome the restlessness of the crowd, which meant at times there was less room for the subtlety of gesture that the work has, but the fact that she won over this audience on a dull, blustery day demonstrated what an artist she is. At first, they did not know how to respond. Was this comedy? A political speech? Walshe pierced these impressions, and their eyes began to widen as they realised what they were seeing. At the climax, she starts to shoot the audience with an imaginary AK47. She ended by throwing an imaginary grenade into the crowd and then froze on stage. The audience rose to their feet, cheering. Ears had been opened up.

Congregation
For most of Saturday and Sunday night there was little else but electronic music. There was impressive invention in the sounds (although it was not always clear who was performing), but the festival missed having a tent for other types of music, such as experimental, indie or folk. The audience was certainly there for it. On Sunday afternoon, Radie Peat from the folk group Lankum provided an hour of communion in a full St Mona’s Church. With electric guitar, harmonium, concertina and her large Russian bayan accordion, her musicality left an impression with every song. She has a unique voice; it’s hard-toned and skilful, but her long, dark ballads always keep you focussed on the story. And then, in the middle, she performed Nirvana’s ‘Something in the Way’, with the whole church, unprompted, humming like a congregation. 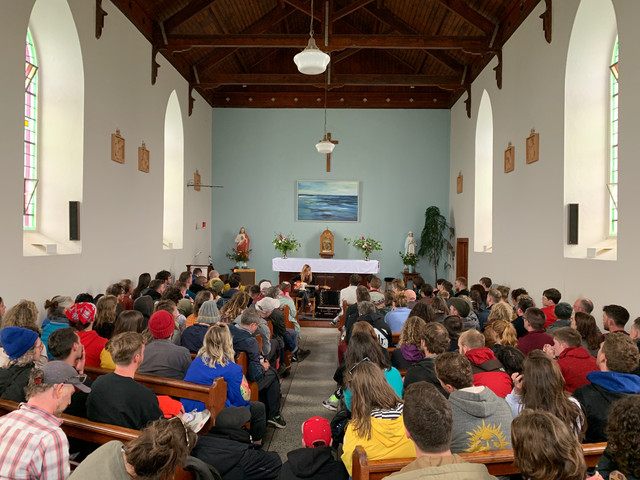 Islands can bring people together, but they are also lawless: they attract people seeking freedom, the unconventional thinkers escaping modern expectations. Down by the ruins of Sherkin Friary, as we drank prosecco in the rain, toasting the launch of Jennifer Walshe’s new album on vinyl (which has the most beautiful art work full of melted objects), we didn’t realise how a moment of pure island nonconformism was waiting for us. The word came that we could walk up to Horseshoe Bay, where Áine O’Dwyer was going to perform her new work Accompaniment for Captives.

Is this our future?
O’Dwyer is from Limerick but based in London. She’s an experimental musician, a harper and church organist, and has released several albums including Music For Church Cleaners and Gallarais.

As we walked up the boreen, we heard what sounded like distorted seagull sounds. It could have been people screaming. We reached the bay, moved down the grassy path, then sat on the heather at different heights. Between the crowd and the cliff there was a large patch of grass with ferns growing. In the middle, O’Dwyer was kneeling and naked.

A speaker off to the right produced more seagull and whale sounds. It bounced off the rocks. O’Dwyer responded vocally, singing, wailing. It felt post-apocalyptic – the human primate nude in the ferns, living wild like an animal again. Is this our future? Our ecological and climate emergency coming to pass? Time disappears. The wind carries her voice around the rocks.

Two engined boats appear at the top of the entrance to the bay. What a disaster; this is sure to intrude upon the performance. They start to move down the bay. Such a nuisance. But wait! There’s something about their symmetry as they approach; the two boats separate and move down either side of the coastline. The ambition of O’Dwyer’s piece becomes clear. This is not an apocalypse. This is a rescue.

O’Dwyer starts to speak metred phrases into a walkie-talkie: ‘ocean, body, over… trace the ocean… one right, one left… trace around hill… over…’. The boats meet in the middle. O’Dwyer vocalises. The boats sound their horns. She intimates more words. They can’t see her. They start to move in a circle. Are they leaving? Save her! Save us!

For another fifteen minutes, all seems hopeless. O’Dwyer is vulnerable in the ferns, the boats oblivious to her; they are moving in smaller circles. But then she starts to crawl through the greenery, making her way slowly to the cliff. One boat starts to move. One boat stays. The crowd is deeply moved by this fragile image of our species trying to be rescued.

O’Dwyer makes it to the cliff and disappears over. The second boat looks like it is now leaving for sure. Minutes pass. Where is O’Dwyer? Save her! Save us! She appears on the rocks below, crawling on all fours like an animal. She makes it to the water, swimming for the boats.

Will she get there?

O’Dwyer’s Accompaniment for Captives was an extraordinary moment for Open Ear. Amidst everything else, it set it apart. We go to islands to escape the rhythm of our contemporary lives. O’Dwyer was waiting. She knew we still needed saving. She made it to the boat, and saved us all.