On the same night as the Philip Glass Ensemble was performing at the NCH in Dublin last weekend, a very different interpretation of Glass’ music, and a contrasting ensemble, could be heard in Glór in Ennis (26 Oct.).

‘Glass and Reich go to Tulla’ is one part of Dave Flynn’s Symphony No. 2 (the ‘Clare’ Symphony). Written in 2013, the passage explores what happens when you take Irish traditional music-type material and reimagine it as Glass or Reich would. If it sounds gimmicky, maybe it would be were it not for the fact that Flynn applies a notable compositional craft to seemingly simple ideas. Cello starts in slip-jig time, viola enters in jig time, violins and uilleann pipes appear in a different time on top, then the entire orchestra joins in on separate parts and everything weaves together. But now consider that the musicians are playing without sheet music; the section is one part of a longer 30-minute, four-movement work that they have memorised entirely. The Irish Memory Orchestra, which Flynn founded several years ago, is compelling to watch because they memorise their parts. There is intense listening, watching, counting – it gives the performance extra heat.

Flynn’s music uses traditional melodic structures combined with contemporary techniques, but he is also using aspects of traditional music that can’t be written down (and in this he is part of a wider movement which I explored in ‘A New Irish Musical Language is Developing’, a practice Flynn himself was urging in an article back in 2005). One of these unwritten aspects is the way traditional musicians remember tunes. It is more by patterns and touch. The tunes can be similar so it can be like a maze; if you take a wrong turn you end up in another. Everything is built on patterns and the subtle differences between them. Flynn appears to use this in building his compositions for the IMO. The second symphony is created in sections, all bound together but maintaining this apparent simplicity. Jack Talty and Niwel Tsumbu provide solos that give the work an additional sense of improvisation and freedom.

Vision
The Clare Symphony, however, was just the prelude to the premiere of another significant work, ‘The Vision Symphony’, Flynn’s Symphony No. 3. This new four-movement work was written for the IMO and 26 visually impaired or blind musicians. Flynn, conscious of the history of musicians with sight loss in Irish traditional music – from harper Turlough Carolan to piper Garret Barry – was aware that musicians today are also excluded from performing in orchestras, and the IMO was the ideal vehicle to challenge this. The symphony was commissioned by Clare County Council with funding from the Arts Council, and arts officer Siobhán Mulcahy, arts and disability officer Ceara Conway, project manager Bernie Healy, and Brian Magill (who provided online materials for the visually impaired musicians to learn the music) were also deeply involved in the project.

The Vision Symphony is in four movements, each named in honour of a blind musician from Clare. The opening Allegro presents a growing dotted texture out of which a traditional-type phrase appears; it is reminiscent of the opening of ‘Anderson’s Reel’. Flynn builds the entire symphony on this phrase; it is moved around the orchestra in different times and comes back in every movement. Flynn on triangle signifies changes and the texture becomes increasingly complex, before the two pipers (a teenage Amy Campbell, who is blind, and Mark Redmond of IMO) lead off with the melody. Flynn includes string passages that would remind the listener of Ó Riada before drum kit comes in, which tended to obscure the detail and constrict the swing that his work generally has. At the end of the first movement, the unique timbre of Chinese flautist Wu Jing, also blind, comes through. 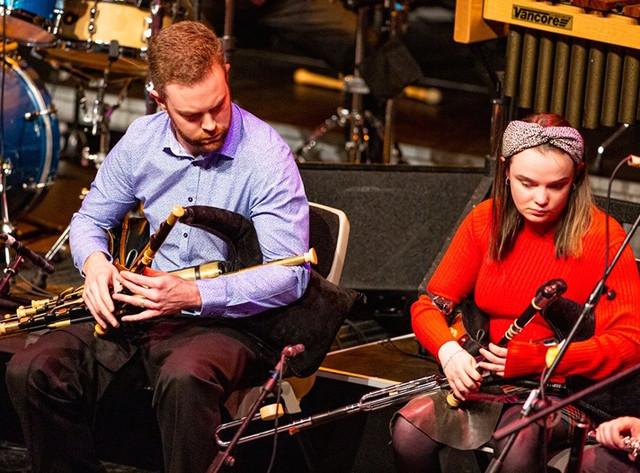 The pipers are to the fore in the second movement, Campbell and Redmond playing a slow-moving melody over a soundscape created by the orchestra. The Scherzo third movement moves the main theme between pipes and strings (led by Maria Ryan), moving in out of timings, before developing on winds in a new more dissonant form. The main theme becomes central to a dialogue between the sections, growing in volume and intensity.

The final Passacaglia makes use of another variation on the main phrase and again Flynn builds in layers. Finally, the Dublin-based Visionaries Choir (the member are all visually impaired), conducted by Frank Kelly, comes in with words based on responses to a questionnaire Flynn gave to people with sight loss to find out about the impact music has on their lives. The lyrics are powerful: ‘We are so attuned to things you can’t hear… now we have shown you there’s nothing we can’t do … Are you surprised?’

Flynn’s craft in combining traditional and contemporary music elements is always something to appreciate, but here he achieved more: he has broken down boundaries for people with sight loss; with an orchestra that plays by memory and with vigour under conductor Bjorn Bantok; and he has again shown what is possible when you use elements of Irish traditional music in a fresh way. Were we surprised? How could we not be? In a world of musical adventure, this was boundary breaking in a new way.