9 July 2021
Interview with the Society of Young Publishers, Ireland

22 October 2020
How the Arts Made Their Funding Breakthrough

1 October 2020
The Futures We are Imagining are Too Narrow

6 May 2020
Podcast: Irish Music Through the Lens – An Interview with Myles O’Reilly

29 April 2020
Podcast: ‘Folk music… can’t be underestimated as a source of huge inspiration’: An Interview with Cathy Jordan of Dervish

15 April 2020
Podcast: From the Bothy Band to the Celtic Fiddle Festival – An Interview with Fiddle-player Kevin Burke

15 April 2020
Review: Carrying So Much – Liam O’Flynn and the Tradition

26 March 2020
Article: There is No Going Back Now – Live Music and the Pandemic

4 March 2020
Podcast: Finding Your Voice as a Folk Singer: An Interview with Daoirí Farrell

26 February 2020
Article: Can Anyone But Artists Themselves Solve Their Money Problems?

13 December 2019
Article: The Harp and Soul of Ireland

21 November 2019
Article: Are We Ambitious Enough for Irish Traditional Music?

17 October 2019
Review – Irish National Opera: There Are No Winners

1 August 2018
Article: How Musicians Can Start to Afford Ireland

16 April 2018
Visiting the Irish Times and TheJournal.ie with students of the MA in Literature and Publishing

5 April 2018
Article: Is Music the Glue That Will Get us Through?

6 December 2017
Article: The Orchestras are Only One Part of the Question

10 November 2017
Visiting Westside Press, IFP Media and New Island Books with students of the MA in Literature and Publishing

4 November 2017
Contributing to Music Matters on BBC Radio 3 – what the internet is telling us about our musical lives. Listen here (starts at 20’50”).

28 October 2017
Chairing a panel discussion titled ‘The harp as a symbol of Ireland – a help or a hindrance?’ at Achill International Harp Festival

8 August 2017
Review of The Second Violinist at the Galway International Arts Festival.

6 June 2017
Announcing the participants of the Music Writer Mentoring Schemes in Galway City and County Clare.

17 April 2017
Taking part in discussion on traditional music and the state on RTÉ Raidió na Gaeltachta as part of Cruinniú na Cásca.

31 March 2017
Visit to Penguin Ireland, Houghton Mifflin Harcourt and O’Brien Press with students of the MA in Literature and Publishing.

12 January 2017
Attending Places Matter: What happens when we invest in the arts? conference, organised by the Arts Council.

2 December 2016
Taking part in the Ireland’s Edge Conference as part of the Other Voices Festival in Dingle. https://goo.gl/0UFjca

1 December 2016
“There is no doubt that Toner Quinn’s Report on the Harping Tradition in Ireland, published by the Arts Council, An Chomhairle Ealaíon in 2015, was a turning point for the harp in Ireland; it acted as a catalyst and captured a sense of the liveliness and bubbling undercurrent of harp activity simmering all over the country. It empowered the harp community, giving it a confident voice to assert, as Quinn pointed out, ‘a tradition that has been recovered, recreated, reimagined and reinterpreted for the present day’.” – Aibhlín McCrann, An Cruitire (Dec 2016)

26 November 2016
Fiddle talk and performance for An tAcadamh in An Cheathrú Rua.

12 November 2016
Article: Irish Musicians, Do Not Normalise This Hatred

28 October 2016
Visiting Lonely Planet (Dublin office), Ashville Media and Westside Press with students of the MA in Literature and Publishing.

9 September 2016
Concert for An tAcadamh in An Cheathrú Rua with Breandán Ó hEaghra (guitar/original songs in Irish) and my son, Oliver Quinn (fiddle).

8 April 2016
Live at the Steeple Sessions by Toner Quinn and Malachy Bourke now on Spotify. https://goo.gl/vbOz5S

14 April 2016
Visiting Storyful, Maximum Media and Gill Books with students of the MA in Literature and Publishing.

2 March 2016
Reading from the work of Bob Gilmore at The World According to Bob: A Night of Irish Music at Café OTO, London.

15 February 2016
Article: Which Political Party Should Get the Music Vote?

23 October 2015
Visiting Hachette Books Ireland, Image Magazine and Brosna Press with students of the MA in Literature and Publishing.

19 October 2015
Presenting my research on the harping tradition in Ireland to the Arts Council and members of the harper community. National Gallery of Ireland, Dublin. Full report to be published by the Arts Council in November 2015.

7 July 2015
Article: Why We Need a Traditional Music Infrastructure

29 April 2015
Article: The End (and the Beginning) of the Experimental Music Festival

16 April 2015
Visiting The Collins Press, Bradshaw Books and Vearsa with students of the MA in Literature and Publishing.

9 January 2015
Article: ‘Our media have a great deal to answer for’

14 December 2014
Article: Is the musical focus of the tech world too narrow?

23 October 2014
Visiting Liberties Press, Irish Arts Review, and Grehan’s Printers with students of the MA in Literature and Publishing

17 September 2014
Speaking at Tower Seminar Series – The Frost Is All Over: Writing about Traditional Irish Music: Óró Domhnaigh and the Journal of Music @ Irish World Academy of Music and Dance, University of Limerick. http://journalofmusic.com/listing/16-09-14/tower-seminar-series-frost-all-over-writing-about-traditional-irish-music-oro

25 July 2014
Article: From the Ground Up: Miltown Malbay and the cultural spaces that draw us back

5 June 2014
Commissioned by the Arts Council to undertake research into the harping tradition in Ireland:
http://journalofmusic.com/listing/19-06-14/arts-council-launches-major-survey-irish-harpers
http://newsletter.artscouncil.ie/1gnjmvkux9y

25 April 2014
Article: The Search for Recognition

10 April 2014
Article: What Ireland Can Teach the World About Music

27 March 2014
Article: Who Would Choose the Creative Life?

8 March 2014
Article in The Journal: Music and austerity – how do we express the time we live in?

8 March 2014
New Music Dublin, NCH, 1.30pm: participating in a discussion on ‘How emerging composers engage with their public’

14 February 2014
Visiting Transworld Ireland and Harmonia with students of the MA in Literature and Publishing.

14 February 2014
Article: All to Play For: A Challenge for Music and Musicians

3 February 2014
Contributor to Arts Tonight: A River of Sound: celebrating and debating The Encyclopaedia of Music in Ireland

24 January 2014
Article: How Can We Connect to the Musical Life Around Us?

20 January 2014
Article: Music and the Betrayal of Ireland

6 December 2013
Live at the Steeple Sessions selected by the Irish Times as one of the traditional music albums of 2013.

16 October 2013
Chairing meeting of Irish harpers at the Arts Council.

20 June 2013
Speaking @ The Future of Music in the Digital World Conference
Text of talk: ‘How can we use digital technology to connect to the musical life around us?’ 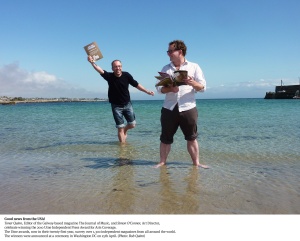 September 2011
Publication of Desmond Fennell: his life and work, edited by Toner Quinn: